Scalable Modeling Of Human Blockage At Millimeter-Wave: A Comparative Analysis Of Knife-Edge Diffraction, The Uniform Theory Of Diffraction, And Physical Optics Against 60 GHz Channel Measurements 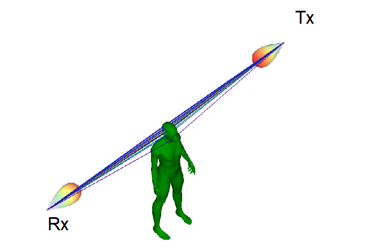 Human blockage at millimeter-wave frequencies is most commonly modeled through Knife-Edge Diffraction (KED) from the edges of the body shaped as a vertical strip. Although extensively validated in controlled laboratory experiments, the model does not scale to realistic 3D scenarios with many, randomly oriented bodies, on which multipath signals can be incident from any direction, not just normal to the strip.

To address this, this article uses WaveFarer to investigate computational electromagnetic methods based on ray-tracing. In addition to the KED method, we compare the Uniform Theory of Diffraction (UTD) and Physical Optics (PO) methods against an extensive suite of precision channel measurements at 60GHz. Also, in addition to the vertical strip, cylinder and hexagon body shapes are considered with the UTD method, and a 3D phantom shape is considered with the PO method.

We found that the PO method is the most accurate, but also the most computationally intensive due to the large number of faces (approximately 8000) in the phantom and due to the inherent complexity of the method itself. While the UTD method with the hexagon shape (approximately 42 faces) is slightly less accurate than the PO method, it provides the best compromise when efficiency is paramount.