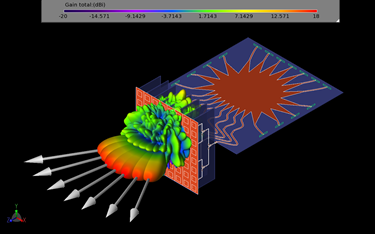 This example describes a more developed 28 GHz antenna array capable of forming multiple beams for use in applications such as 5G network base stations. The system consists of three parts: a Rotman lens beamformer with seven input ports and eight output ports, a series of stripline Wilkinson power dividers to split each Rotman output into eight equal signals, and an 8x8 patch antenna array. The design process consists of three separate stages. This example will describe the creation of each stage of the device and evaluate the performance of the individual stages and the full device.