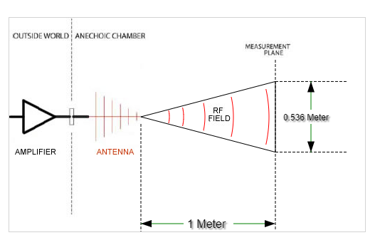 This tool developed by A.H. Systems will calculate the maximum coverage that the antenna will cover from a specified distance and the antenna's half-power beamwidth.

During RF immunity testing, the product is subjected to a specific RF field strength (say 10 volts per meter) for a fixed dwell time and over a series of predetermined spot frequencies. If the half-power beamwidth of the antenna is not large enough to cover the equipment under test, then one of the following should be performed:

Half-Power Beamwidth is the angular distance on ether side of the peak field, or main lobe, of the antenna that represents half of the peak field intinsity. Half the power is equivalent to -3dB, so the half-power beamwidth is also sometimes referred to as the 3dB beamwidth.

Separation Distance is the distance from the antenna to the product under test.