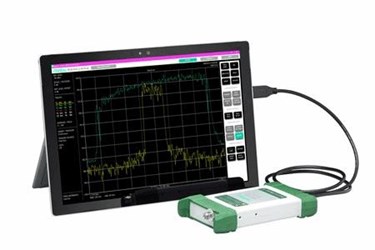 The wireless industry is on the brink of a large technology inflection that is almost analogous to the transition from analog to digital communication. Development of 5G is a major step-function in commercial technology, utilizing spectrum initially at 28 GHz and 39 GHz, with a long-term roadmap traveling into the 70 GHz bands. This is a far cry from the <6 GHz used by previous commercial wireless standards over the past 15 years.

Over the same time period, the Department of Defense (DoD) and national security organizations have dealt with their own seismic shift — the ever-changing look of adversaries, both peer and non-traditional. Convergence of these new threats and the infiltration of commercial communication systems into millimeter wave (mmWave) frequencies has led to a need — and, consequently, a market opportunity — for emerging technologies that help keep people safe, be it on the front line or in an office building. If that isn’t enough of a challenge, these new technologies must be cost-effective, highly efficient, and scalable to address future threats.

The high-frequency convergence became a focal point in 2015 when federal agencies allocated 500 MHz of spectrum for both mobile and fixed wireless commercial broadband. This decision was made to create a foundation on which 5G could be built. One serious side effect is that these new commercial networks will invade military wavelengths. The result is a spectrum migration that could take upwards of a decade to complete.

While 5G allows commercial mobile carriers to satisfy consumer needs, the infiltration of these applications into traditional defense and aerospace spectrum creates problems. The U.S. military uses these bands for radar, unmanned aircraft systems, telemetry, meteorological satellites, computed tomography, and classified systems. Will they be affected by 5G systems and, if so, how much?

The resultant spectrum congestion may limit operational capabilities due to the increasing deployment and bandwidth of wireless communications, the use of net-centric and unmanned systems, and the need for increased flexibility in radar and communications spectrum to improve performance and overcome sophisticated countermeasures.

Thus, the auctioning of spectrum for commercial use presents the military with two options: share existing bands with commercial users, or travel up the spectrum table to higher frequencies. Each choice is accompanied by its own set of obstacles. If the military remains in the existing spectrum, interference issues must be addressed. Conversely, the higher frequencies provide ample bandwidth — in theory — but their shorter radio waves don't travel as far, and often are blocked by buildings or other structures. Overcoming these obstacles requires using different waveforms and more power.

It is such an issue that the Defense Advanced Research Projects Agency (DARPA) has created the Spectrum Collaboration Challenge (SC2). According to DARPA, the goal of SC2 is to create “a new, more efficient wireless paradigm in which radio networks autonomously collaborate to dynamically determine how the spectrum should be used moment to moment.” In the interim, the defense industry must accurately and efficiently monitor spectrum to ensure military ops are successful.

Commercial and military leaders responsible for wireless systems have more than shared spectrum in common. Both must adhere to tight budgets, as well as stringent design guidelines and standards. For these reasons, technologies have been evolving to efficiently address testing products and systems at higher frequencies. These new test technologies must meet a set of criteria to satisfy the military requirements associated with verifying microwave and mmWave designs, including:

Emerging applications at microwave and mmWave frequencies also will require test solutions to evolve to track hidden signals. In today’s battlefield, capturing transmissions between enemies is critical to mission success and safety. Covert operatives and terror cells often send transmissions as near to the ambient noise floor as possible so they will not be detected. Field spectrum analyzers and VNAs are available that provide high-accuracy measurements near the noise floor to uncover these hidden signals.

Further, portable spectrum analyzers with continuous frequency coverage from kHz to mmWave can scan the entire ever-widening commercial spectrum to better monitor known and unknown transmissions. These tools’ compact size means that wide frequency coverage now can be achieved in a solution with the same dimensions as a pocketable mobile device.

A good example of this “ultraportability” is a set of recent trials in which a spectrum analyzer weighing approximately 10 ounces was mounted on a Commercial Off The Shelf (COTS) drone to detect hidden signals up to 110 GHz. Such capability could eliminate the labor-intensive practice of searching for interferers and hidden signals from the ground, ultimately keeping military personnel safer.

Today’s military branches and defense companies stand at the precipice of a new world of high-frequency communication systems. As 5G technologies bring commercial applications into the microwave and mm-Wave bands, new challenges must be met to provide safety and security to armed forces and civilians alike.

Russel Lindsay is a product manager for Anritsu Company, specializing in power measurement and signal generation. Russel has worked in test and measurement for the last four years, prior to which he spent time in various engineering roles in aerospace and defense, from system engineering and test to R&D design. He holds a Bachelor of Science in Electrical Engineering from the University of Utah and a Master of Business Administration from Arizona State University.

Stan Oda has a BSEE from the Massachusetts Institute of Technology. He has worked for several companies in the electronic test and measurement industry before coming to Anritsu for the past four years as a product manager in the Vector Network Analyzer group.