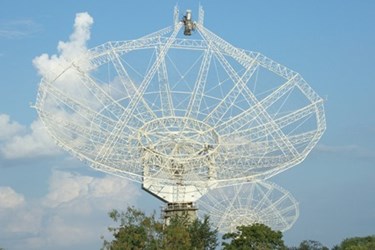 The Giant Metrewave Radio Telescope (GMRT), the world’s largest radio telescope facility built and operated by the National Centre for Radio Astrophysics (NCRA) of the Tata Institute of Fundamental Research (TIFR) is going through a major upgrade in its capabilities. The upgrade, started in 2012, is currently midway to completion, and the current version is being inaugurated and released to scientists on the occasion of Engineer's day, on September 15, 2015. The programme is being held at the GMRT Observatory, Khodad on 15th September, 2015 at 10.30 am. and will be inaugurated by Dr. Srikumar Banarjee, Former Chairman of the Atomic Energy Commission and Former Secretary of the Department of Atomic Energy, Government of India.

With this release, the GMRT will be able to observe objects in the Universe in new frequency space which is not covered by any other major observatory in the world, and also make images with improved sensitivity. This upgrade will maintain the position of the GMRT as a leading radio observatory in the world, allowing front-line research to be continued here for many more years.

GMRT operating at low frequencies, is an array of 30 fully steerable, 45 metre diameter antennas, spread out over a 30 km region around Khodad, near Narayangaon town of Pune district in western India and has been in operation since 2002. The GMRT is used by astronomers from across the world for cutting edge, front-line research in numerous areas of astronomy and astrophysics. It was designed to operate at a range of spot frequencies from 50 MHz to 1420 MHz, in five distinct narrow frequency bands with a maximum bandwidth of 32 MHz, primarily due to technology limitations of that time.

At present, as part of the upgrade, the frequency coverage of the GMRT is being increased to provide seamless frequency coverage from 130 to 1500 MHz, to enable astronomers to receive signals at any frequency in this range, just like tuning a commercial radio receiver to listen to any station of our choice. This will allow new aspects of the Universe to be explored. The maximum bandwidth is being increased to 400 MHz from the existing 32 MHz which will lead to a factor of three (3) or more increase in the sensitivity.

The upgrade uses the latest analog and digital technologies, servo systems etc to enhance the telescope performance and features, along with matching improvement in infrastructures such as civil, electrical and mechanical. These improvements will make the GMRT more versatile and improve its sensitivity by more than a factor of three, allowing many new kinds of experiments and research of the cosmos to be carried out, and will keep the GMRT on the forefront of the international scenario in the field, for many more years to come.

The salient features of uGMRT-phase II, being released to users on 15th September, are as follows: