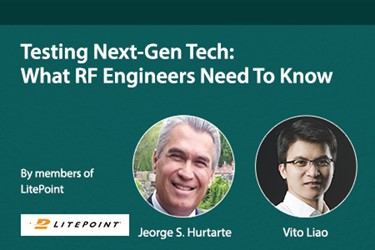 5G devices operating at millimeter wave frequencies contain two or more tiny antenna arrays, each array containing four or more patch antennas.   The spatial beam direction of the antenna array can be changed on the fly by simply changing the gain and phase of each patch antenna. This dynamic change of the beam direction is called beamforming, and beamforming performance needs to be characterized in the R&D lab and verified in DVT. 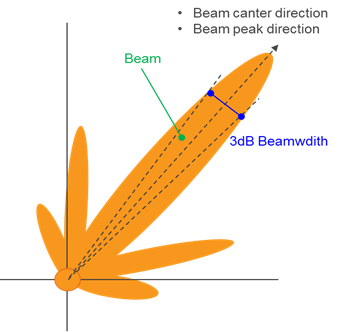 The 5G 3rd Generation Partnership Project (3GPP) NR specification [2] has defined four frequency operating bands (Table 1), all of which are time division duplex (TDD). TDD is beneficial to beamforming because of the uplink (UL) and downlink (DL) channel reciprocity. The network equipment can use the UL channel to ascertain the DL channel characteristics, and then chose the optimum beamforming for the DL signal to the UE.

Fig. 2 shows a user equipment (UE) device (e.g., smartphone) with two built-in 5G mmWave modules, each containing a 1x4 patch antenna array and four dipole antennas. For the following discussion, we will consider either the module or the final product as the device under test (DUT). For the example shown, each patch antenna element can have a vertical (V) or horizontal (H) polarization radiation pattern, which transmits or receives electromagnetic waves in either the vertical or horizontal direction.

When the antenna module is inside the final product (e.g., the smartphone), the antenna radiation pattern can be altered slightly due to the interaction with the final product enclosure materials and other surrounding components. Thus, the antenna performance, including its beamforming characteristics, needs to be tested using an appropriate OTA chamber of size, architecture, and shielding performance that ensures accurate antenna radiation pattern measurements. 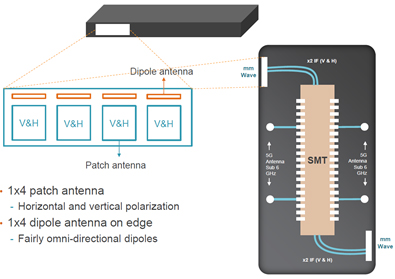 Beamforming characterization aims to find the proper phase angle and gain value for each antenna element in order to achieve the desired pattern and direction for the specific DUT design in either its module or final product form. Thus, a beamforming “codebook” needs to be generated that contains the phase angle and gain for each antenna array required to generate a beam in a specific spatial range direction.

Beamforming characterization can be performed using either a CATR or DFF chamber [3], depending on the size of the DUT and its antenna array aperture [4]. The main requirements are that the geometric center of the DUT is placed at the center of the test zone and that the DUT is entirely enclosed in the “quiet zone.”  Beamforming codebooks are then characterized and optimized, taking into account each specific antenna design (e.g., dipole, patch antenna arrays, etc.) and the end product system characteristics (enclosure material, antenna locations, etc.). And, since the OTA chamber used for this example comes equipped with a DUT positioner mechanism (a common feature on many OTA test chambers), the DUT can be rotated at various angles while the beam is continuously steered towards the zenith test antenna inside the OTA chamber.

In order to achieve VSA testing benefits, “DUT assist” is needed, since the “reference” IF signal now is generated directly from the internal 5G modem (rather than from a VNA). The DUT’s internal 5G modem sets the respective phase and gain for each of the antenna array elements (Fig. 2) and the resulting beam’s signal characteristics are measured and analyzed using the VSA equipment.

The design verification testing (DVT) stage usually requires that a larger sample of DUTs are tested to confirm that the DUT’s beamforming is performing as expected.  To achieve this, a subset of the beamforming codebook can be used for “corner case” testing.

Beamforming verification usually is performed using a direct far field [3] (DFF) OTA chamber. Such a setup is very simple and can be used for both module and UE final products.

During beamforming verification, it is the DUT itself that sets the specific phase and gain for each antenna element required to generate a beam in a certain direction (again, using a subset of the beamforming codebook). Thus, only one port is required in the VSA equipment. And, as explained earlier, since the OTA chamber has a DUT positioner mechanism built-in, the DUT can be rotated at various angles while the beam is continuously steered towards the zenith test antenna inside the OTA chamber.

Jeorge S. Hurtarte, Ph.D, is Product Marketing Manager at LitePoint Corporation. Prior to joining LitePoint, Dr. Hurtarte held various technical and management positions at Teradyne, TranSwitch, and Rockwell Semiconductors. He holds Ph.D. and B.S. degrees in electrical engineering, an M.S. in telecommunications, and an M.B.A. Dr. Hurtarte has served on the Advisory Board of Directors of the Global Semiconductor Alliance, TUV Rheinland of North America, and the NSF’s Wireless Internet Center for Advanced RF Technology. He is the secretary of the IEEE 802.11ay task group. He is also the lead co-author of the book Understanding Fabless IC Technology.

Vito Liao (Liao, Mingkun) is applications engineer at LitePoint Corporation, where he is responsible for wireless RFFE testing and 5G testing. Vito has many years of experience in cellular chipset physical layer and RFFE driver in 2G, WCDMA, TDSCDMA, LTE technologies.