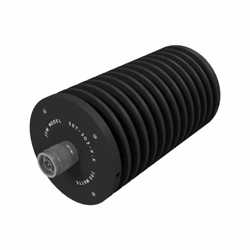 There are many situations in which it becomes necessary to match the impedance of a load to that of the source so as to maximize power transfer. Having a mismatch between a source (an amplifier) and a load reduces the delivered power and efficiency of the system; when a transmission line is terminated with impedance that is not equal to the characteristic impedance of the line, not all of the incident power is absorbed by the termination. Some of the power is reflected back to the source.

While terminations are employed to prevent such signal reflections, mismatch terminations can be useful in providing a quick and easy method for calibrating equipment or checking the performance of an amplifier. The value of testing with mismatch terminations is significant because high-efficiency amplifiers can be characterized by their ability to drive mismatched loads.

The principal figure of merit concerning what happens with having an impedance mismatch is voltage standing wave ratio (VSWR). VSWR is determined by sending signals at various frequencies through the cable to the 50 ohm load under test and observing what signals are reflected. The amount of energy reflected depends on the level of the mismatch, so VSWR will be a value above 1. As VSWR increases, so does the amount of lost power.