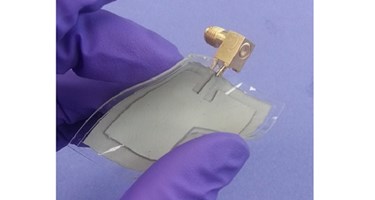 Researchers from North Carolina State University have developed a new, stretchable antenna that can be incorporated into wearable technologies, such as health monitoring devices.

“Many researchers – including our lab – have developed prototype sensors for wearable health systems, but there was a clear need to develop antennas that can be easily incorporated into those systems to transmit data from the sensors, so that patients can be monitored or diagnosed,” says Dr. Yong Zhu, an associate professor of mechanical and aerospace engineering at NC State and senior author of a paper describing the work.

The researchers wanted to develop an antenna that could be stretched, rolled or twisted and always return to its original shape, because wearable systems can be subject to a variety of stresses as patients move around.

To create an appropriately resilient, effective antenna, the researchers used a stencil to apply silver nanowires in a specific pattern and then poured a liquid polymer over the nanowires. When the polymer sets, it forms an elastic composite material that has the nanowires embedded in the desired pattern.

This patterned material forms the radiating element of a microstrip patch antenna. By manipulating the shape and dimensions of the radiating element, the researchers can control the frequency at which the antenna sends and receives signals. The radiating layer is then bonded to a “ground” layer, which is made of the same composite, except it has a continuous layer of silver nanowires embedded.

The researchers also learned that, while the antenna’s frequency does change as it is stretched (since that changes its dimensions), the frequency stays within a defined bandwidth. “This means it will still communicate effectively with remote equipment while being stretched,” Adams says. “In addition, it returns to its original shape and continues to work even after it has been significantly deformed, bent, twisted or rolled.” As the frequency changes almost linearly with the strain, the antenna can be used a wireless strain sensor as well.

“Other researchers have developed stretchable sensors, using liquid metal, for example,” Zhu says. “Our technique is relatively simple, can be integrated directly into the sensors themselves, and would be fairly easy to scale up.”

The paper, “Stretchable and Reversibly Deformable Radio Frequency Antennas Based on Silver Nanowires,” is published online in ACS Applied Materials & Interfaces. Lead author of the paper is Lingnan Song, an undergraduate at Zhejiang University who worked on the project at NC State during an exchange program. Co-authors include Amanda Myers, a Ph.D. student at NC State; and Dr. Jacob Adams, an assistant professor of electrical and computer engineering at NC State.

The work was supported in part by the National Science Foundation under grant EFRI-1240438 and by NSF’s ASSIST Engineering Research Center at NC State under grant EEC-1160483.