Next Generation Wireless: Riding On The Back Of Millimeter Waves 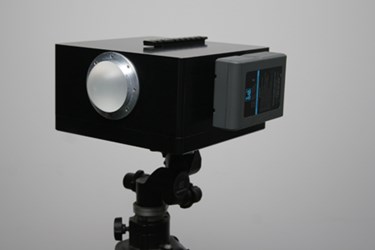 Millimeter waves (30-300 GHz) are a subset of the microwave band, which is itself part of the larger radio wave spectrum.  These waves derive their name from the size of the wavelength, which measures from one to ten millimeters.

It is this characteristic, along with continuous bandwidth not available at more commonly used lower frequencies that makes millimeter wave technology the ideal solution for point-to-point, high speed, high bandwidth wireless.

The technology, available as commercial transmitter/receiver units that operate at Gbps speed, is already being utilized in multi-billion dollar markets such as cellular communications for the next generation of micro and picocell towers, High Definition/3D digital video for broadcasting organizations and the motion picture industry, and for High Frequency Trading on Wall Street.

The Millimeter Wave
In spite of the relative anonymity of MMW radios in the commercial area, the MMW spectrum has been utilized for military satellite-satellite communications for decades.

Due to the dramatically reduced costs recently of MMW Integrated Circuits (a trend that is expected to continue), the technology is now being increasingly utilized for commercial applications.

The incredible promise of the millimeter wave, however, has as much to do with the Federal Communications Commission (FCC) as any other factor.

The FCC was formed by the Communications Act of 1934.  As part of its mandate, the FCC allocates specific wavelength frequencies for everything from FM/AM radio stations to television, cell phones, satellites, aeronautics, and the military – to name a few.  However, with the explosion of wireless applications, most are jammed into small bands at lower frequencies of the radio spectrum.

Although the millimeter wave band is also regulated by the FCC, if the more crowded bands can be compared to the population per square foot of Manhattan, New York, then the wide open expanses available to millimeter waves are more like Yellowstone National Park.

This extra space is critical because it provides the “continuous bandwidth” required for high bandwidth, high speed data transmission.  Without it, lower frequency products (despite being capable of such speeds were it not for its neighbors) are hitting a glass ceiling that even refinements and improvements in wireless technology cannot overcome.

Lower frequency allocations, for example, are typically 2-5 MHz.  In the millimeter wave spectrum the total allocation potential is up to 250GHz, with 5, 7, 10, 15, even 20GHz of continuous bandwidth available.

With so much room to work with, practical data rates in the millimeter band top out above 40 Gbps.

Wireless for Next Generation Cellular
The highly directional characteristic of millimeter waves is ideally suited to cellular communications, particularly in crowded urban environments.

In a market that analysts estimate will exceed $5 billion by 2015, the installation of small base stations called micro and picocells is expected to outnumber traditional cell towers by as much as 20 to one.

Micro and picocells cover only a limited area, but require less power, cost less and have a much smaller footprint than larger “macro” cell towers.  This makes them ideal for indoor locations such as entertainment venues, malls, airports, train stations, office buildings, and hotels.

But the advent of next generation cellular networks is creating a new backhaul connectivity problem: how to connect the growing number of smaller base stations to the core, either through wired or wireless connections.

This is exacerbated by concerns over frequency congestion and interference in dense cell deployments where 4 or more picocells could be mounted on light poles in a single parking lot or on a rooftop.

The most obvious solution for high speed transmission of data-intensive content would be to establish a physical connection using fiber optic cabling.  However, the cost and challenge of implementing fiber to each micro or picocell site is prohibitive, particularly in urban areas where streets and sidewalks cannot easily be trenched.

As a result, outdoor, “fiber optic quality” wireless millimeter products are currently being considered by providers.  With typical link distances for picocell backhaul estimated at a few hundred meters between sites, and microcells less than two kilometers, millimeter wave products are ideally suite for such applications.

“In many key ways millimeter wave devices can be more reliable, and even faster, than fiber optics,” says Pleasant.  “Due to a reduction in latency, transmission speed is improved.”

Millimeter wave radios require only very small antennas, measured in inches rather than feet for Wi-Fi and other wireless options.  This addresses the concern over potential “visual pollution” caused when mounting a large quantity of such products to light poles, billboards, or sides of buildings.

“Narrow beam antennas allow systems in these bands to be engineered in close proximity to one another without causing interference.  Since a greater number of highly directive antennas can be placed in a given area, the net result is higher reuse of the spectrum, and higher density of potential users,” says Pleasant.

In anticipation of the coming micro and picocell boom, Renaissance Electronics and Communications and its wholly owned subsidiary, HXI, recently released several millimeter wave radio products for this market.  Since 1991, REC/HXI has provided RF, Microwave and Millimeter Wave components, sub-assemblies, integrated assemblies, and sub-systems for military and commercial applications.

The company’s GigaLink Light Speed radios were the first millimeter wave radios in the 60 GHz and 70 GHz band to achieve FCC certification for unlicensed and light licensed commercial applications.  These millimeter wave transmitter/receiver units have a full duplex throughput of 1.25 Gbps and higher, offering plenty of bandwidth.

These radio links are designed to minimize latency, or lags in data transmission, which is critical to the next generation of data centric devices that must accommodate Voice over IP (VoIP), live digital streaming, large file downloads, and video conferencing through mobile handsets.

Wireless for HD and 3D/HD Digital Video
High speed, high bandwidth wireless that can transmit uncompressed high definition (HD) video signals and even High Def 3D is required to place digital video cameras in remote locations without wires and without concern for interference.

The motion picture, television, sports, and Electronic News Gathering (ENG) organizations have struggled for some time to identify wireless and even physical cabling connections that can keep up with the rapidly increasing bandwidth required for high definition and 3D filming.

Because 3D is shot essentially utilizing two cameras that film slightly offset images that are synchronized to create the dimensional effect, two independent HD streams must be transmitted simultaneously.  This immediately doubles the data transmission requirement and presents the challenge of doing so through a delivery system – physical or wireless – that has no latency issues.

Digital 3D/HD fiber optic cable has significant latency issues that can affect the synchronization of the two digital streams of data.  To compensate, complex and expensive multiplexers are required, which lead to racks of equipment on-site and a completely non-portable solution. 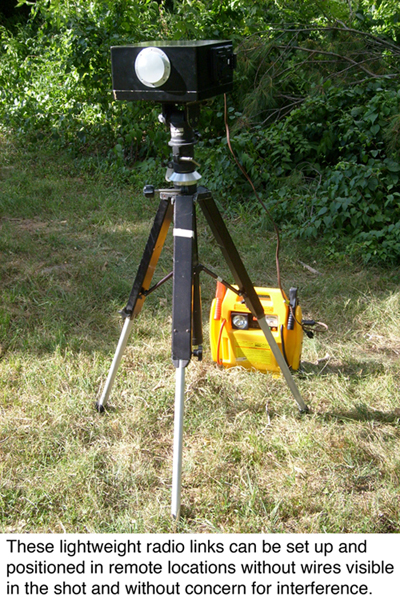 Due to the deficiencies of fiber optic cable, the industry often utilizes a coax cable solution that can be run to a distance of approximately 300 meters.  However, the limitations of data transmission often lead to stepping down the resolution and sacrificing quality.

The GigaLink Products transmit up to 500 meters in clear air conditions and were developed specifically for use with Sony HDC and HDCU-F950 Digital 4:4:4 CineAlta systems but will interface with any SMPTE 372M or SMPTE 292M compliant production system.

The dual channel model can transport independent, uncompressed video signals from two HD cameras or alternately High Definition 3D with both 3D/HD input signals transported in perfect synchronization at 2.970 Gbps (combined).  This is all without the need for compression or forward error correction, avoiding the associated latency.

The concept of HFT grew out of the SEC’s 1998 decision to allow electronic exchanges to compete with the NYSE and other marketplaces. By 2010, HFT was accounting for more than 70% of the trades in U.S. equity markets, and a growing percentage of trades in other countries.

Unlike other types of stock strategies that try to profit from large changes in the prices of a stock over a period of time, HFT involves analyzing massive amounts of information and locating even minute opportunities for profit that may have otherwise been overlooked. By executing thousands or millions of such transactions daily, billions of dollars in profit can be made.  The HFT is usually not interested in holding onto a stock for more than a few seconds and will start each day without any holdings.

Even if the HFT doesn’t make a direct profit on the sale of the equity, it can still make money since exchanges will typically pay the HFT a small amount, say ¼ cent per share, for the transaction. All those pennies add up. According to Tabb Group, a financial markets research and strategic advisory firm, by 2008 traders earned $21 Billion in profits off HFT.

HFT can generate huge profits, but only with the right infrastructure. Trading companies, therefore, heavily invest in the hardware, software and personnel necessary to gather and analyze momentary changes in market data and then execute based on that data.

To make this possible, exchanges have implemented systems which brought down the latency to about 3 milliseconds on average.

Contributors to network latency include the time it takes for a packet to travel between one place and another at the speed of light; the medium itself (optical fiber, wireless), and the size of the packet since larger packets take longer to receive and return than smaller ones.

Other conditions that affect latency are the speed of processing through a router or other gateway node.  Packets may also experience storage and hard disk access delays at intermediate devices such as switches and bridges.

The physical distance of the cabling is also a factor.  To reduce latency, trading firms have placed their computers as close as possible to those of the exchange.

But that is a risky proposition. Particularly after 9/11, many firms decided to move their data centers out of Manhattan and placed them in non-descript buildings in New Jersey or on Long Island, without even the company name on the building, so the data centers are not a target for terrorists.

While this did make the data centers more secure, this move increased the distance between the HFT computers and the trading systems on Wall Street, sometimes adding hundreds of microseconds to each round trip.

Installing new lines in a city like Manhattan presents its own difficulties.

“Running fiber often isn’t practical in an urban environment,” says Pleasant. “To install fiber, you have to disrupt local infrastructure like digging up streets or hanging it on pre-existing structures, which is expensive and time consuming.”

As a result, HFT firms are increasingly turning to wireless transmission systems to connect their data centers to the exchanges.

A trading company can install millimeter wave radio links on top of a data center in New Jersey and use it to create a direct connection over to Manhattan. Or, if the distance is too great for a single link, or if there are obstructions that would block the signal, a series of radio links can be used to relay the signal.

By using millimeter wave instead of fiber optic cables, an HFT firm can establish a much shorter path to the marketplace, reducing latency.

“Lower latency equals faster trading speeds which equals more money to be made for the end user,” adds Pleasant. “In this industry nanoseconds count, so having the lowest latency connections is a big deal.”

For more information about Renaissance Electronics and Communications, call 978-772-7774; or visit us online at www.rec-usa.com.