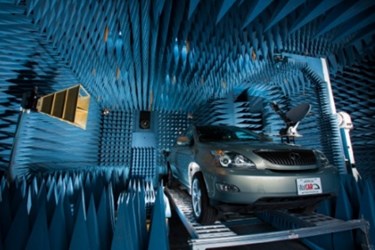 A world-class facility that could lead to the creation of new wireless technologies for use in smartphones, cars, healthcare, and beyond, opens at the University of Waterloo recently.

Considered one of the best in the world for testing electromagnetic devices, the $15M Centre for Intelligent Antenna and Radio Systems (CIARS) features four interconnected indoor laboratories, one outdoor lab, and a highly advanced computational facility.

The centre is a boon for academic and industry researchers who specialize in everything from next-generation wireless communications, to mobile health, car radar, satellite communication, futuristic nano-sensors and smart devices.

“The University of Waterloo is very pleased to be the home of the Centre for Intelligent Antenna and Radio Systems’ new facilities, the first of their kind in Canada, and amongst the most advanced in the world,” said Pearl Sullivan, dean of engineering. “CIARS supports and promotes multidisciplinary research collaborationin highly diversified areas such as emerging intelligent wireless technologies, sensing, nano-scale radio-wave devices, bio-medical electromagnetism and more."

The facility and its instruments can measure electromagnetic fields radiated by objects as tiny as a human hair to as big as a two-ton truck, with the highest precision over the widest range of frequency possible in any academic facility in the world.

CIARS features a unique multi-configuration electromagnetic radiation lab, including an anechoic chamber and terahertz measurement facilities. Researchers hope that the facility will help them learn more about terahertz, a part of the electromagnetic spectrum between radar and fibre optics that is not yet fully understood. The facility offers researchers access to new technologies that may offer life-changing outcomes in bio-technology, genetics, pharmaceutics, and targeted drug delivery.

“Sitting between radio frequency and light-wave, terahertz is the most exciting and least explored portion of electromagnetic spectrum, open to unlimited possibilities,” said Safieddin Safavi-Naeini of Waterloo's Department of Electrical and Computer Engineering, and CIARS director. “We have only just started to understand and to explore terahertz in the last decade. Even though we’re just launching our new facility, word has spread and we already have considerable interest from global academic and industry circles.”

"This amazing new facility integrates all stages in fundamental research in radio science and technology under one roof,” said Feridun Hamdullahpur, president and vice-chancellor of Waterloo. “This centre builds on the Faculty of Engineering's international reputation for research excellence, and further demonstrates Waterloo's position as a leader in innovation and collaboration ready to solve the challenges of the future.”

Although the facility is set up for study at the University of Waterloo, researchers will be able to use it remotely. The 5,000 square-foot facility took more than five years to build and cost about $15M.

The Canada Foundation for Innovation, the Ontario Research Fund, industry partners and others helped fund the new lab.

“The CIARS labs will be an excellent example of world-class infrastructure serving as a catalyst for research-driven growth in Canadian communities,” says Gilles Patry, president and CEO of the Canada Foundation for Innovation. “We are proud to support the University of Waterloo’s research efforts to explore uncharted territory within the electromagnetic spectrum that will shape the future of wireless technology.”

About The University of Waterloo
In just half a century, the University of Waterloo, located at the heart of Canada's technology hub, has become one of Canada's leading comprehensive universities with 35,000 full- and part-time students in undergraduate and graduate programs. Waterloo, as home to the world's largest post-secondary co-operative education program, embraces its connections to the world and encourages enterprising partnerships in learning, research and discovery. In the next decade, the university is committed to building a better future for Canada and the world by championing innovation and collaboration to create solutions relevant to the needs of today and tomorrow. For more information, visit www.uwaterloo.ca.

Source: The University of Waterloo