EM.CUBE™ utilizes a modular approach to the solution of large-scale electromagnetic problems. This powerful software suite features a number of computational modules built upon a common framework that work together seamlessly to provide practical solutions to system-level RF problems.  Each computational module has been optimized to address a certain class of electromagnetic structures based on a particular numerical technique.

EM.CUBE's universal framework provides the ideal environment for hybrid simulations of complex, multi-scale electromagnetic problems, where a single numerical technique often proves to be computationally inefficient or simply impractical. In such cases, one usually breaks up a large structure into a number of smaller manageable sub-structures with common length scales or similar physical characteristics. Each sub-structure can be analyzed in EM.CUBE using the most effective simulation engine. The simulation results from different sub-structures can then be interfaced with each other using a number of cross-module utilities such as Huygens surfaces and Huygens sources to arrive at the final solution.

The integration of EMAG's older products within EM.CUBE's unified and streamlined framework has been more of a necessity than a mere convenience. Over the past eighteen years, EMAG Technologies has fulfilled a large number of projects that required complex hybrid simulation tools for modeling multi-scale RF problems. Examples of these are co-site interference among tactical vehicular communication systems, adaptive networking in high multi-path urban environments, networks of unattended sensors with near-ground operation, antennas on engineered meta-material substrates or complex platform structures, and see-through wall imaging radar systems, to name a few. With the introduction of EM.CUBE 2013, we are bringing a totally new level of simulation capability to the desktops of user like you at a very low cost.

Highlighted Models (click the links below for details on each): 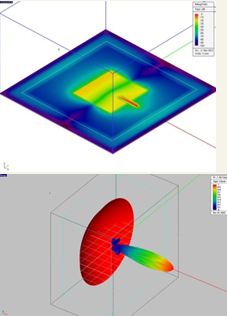 EM.Tempo is the evolution of EMAG's former EMLOUNGE product, which was originally developed in 2005 for the U.S. Navy for modeling EMC/EMI and shielding effectiveness in electronic equipment. EMLOUNGE was later extended to handle complex 3-D antenna structures and mounting platforms. As EM.CUBE's fdtd.module, the tool can analyze a wide range of 3-D electromagnetic radiation, scattering and propagation problems. It also features an integrated SPICE-based circuit simulator, which together with the FDTD kernel can solve mixed circuit-EM modeling problems in a self-consistent manner.

Mesh generator can discretize very complex 3D structures in an adaptive manner and provide a fine mesh only where it’s needed to accurately represent your model for an optimal combination of speed and precision. 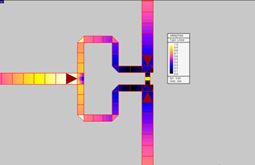 In 2001, EMAG Technologies Inc. introduced its first software product EMPiCASSO, Printed Circuit Antenna System Simulator and Optimizer. It was originally developed for the U.S. Army for modeling and design of large planar phased arrays. The product has since been showcased every year in the International Microwave Symposium Exhibition. EMPiCASSO's core functionality transitioned to EM.CUBE's planar.module. As part of this transition, the new planar.module now boasts a powerful CAD modeler that can easily create and mesh very sophisticated, interconnected, trace geometries on multilayer substrate configurations. 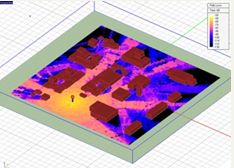 EMAG's popular EMTerrano product, first introduced in 2003, reemerged as EM.CUBE's propagation.module. EMTerrano was originally developed for the U.S. Army to model communication system connectivity in urban battlefield environments. Its simulation engine was extensively validated by the U.S. Army in a number of real-world urban scenarios, and its performance surpassed all the competition tools by large margins. In its reincarnation as propagation.module, the older product is now equipped with a versatile and dynamic scene generator capable of treating arbitrary building geometries and interacts with EM.CUBE's full-wave analysis modules. 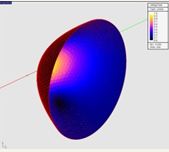 Huygens blocks. EM.Picasso, EM.Tempo and EM.Libera's Wire MoM engine all can run "Huygens Sweeps" of a structure illuminated by a plane wave source. Upon completion, they generate macromodels for the equivalent surface electric and magnetic currents on a specified Huygens box enclosing the full-wave structure as functions of the incidence angles. When the rays emanating from an excitation source hit these Huygens surfaces, they excite surface electric and magnetic currents, which reradiate into the free space. Using the new Huygens blocks, you can approximately model dielectric blocks or complex non-metallic structures in the PO module. 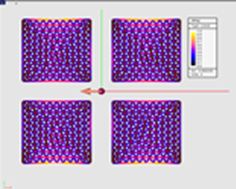 Huygens blocks: EM.Picasso, EM.Tempo and EM.Libera's Wire MoM engine all can run "Huygens Sweeps" of a structure illuminated by a plane wave source. Upon completion, they generate macromodels for the equivalent surface electric and magnetic currents on a specified Huygens box enclosing the full-wave structure as functions of the incidence angles. A Huygens block in EM.Libera's Wire MoM Module is an array configuration of such Huygens surfaces with their associated surface current macromodels. When the rays emanating from an excitation source hit these Huygens surfaces, they excite surface electric and magnetic currents, which reradiate into the free space. 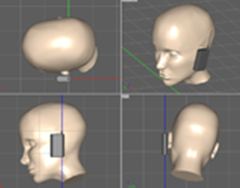 CAD.module is an easy-to-use 3D modeler for generation, import and export of complex large-scale structures and scenes with micro-scale details.

All parameters can be expressions based on variables, which can then be used in parameters sweeps and optimizations.

EM.CUBE's streamlined and intuitive user interface places an extensive array of CAD, simulation and visualization tools at your fingertips. The common interface environment allows you to migrate easily and intuitively among different modules or move various parts of structures and scenes back and forth across these modules.


These are the minimum requirements for EM.CUBE to run efficiently. If you have any questions regarding the ability of your system to run EM.CUBE, please contact us.