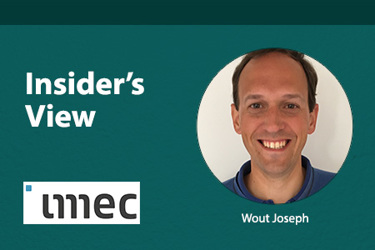 Massive MIMO (multiple-input / multiple-output) — like mmWave and small cell technology — is considered a key enabler of tomorrow’s 5G networks. It uses antennae composed of tens of sub-elements, elements that allow radio beams to be steered to mobile users’ exact location. This, in turn, makes for significantly higher data rates and excellent coverage, even when line-of-sight between the antenna and the user is lacking, or when used at (indoor) settings with a lot of reflection.

The introduction of such radically new wireless network technologies necessitates novel approaches to model and estimate the resulting electromagnetic field (EMF) exposure. So far, calculating the electromagnetic radiation emitted by a mobile network has been relatively straightforward, considering two main parameters: the relative distance between user and antenna, plus the direction of the radio signal with respect to the antenna (radiation pattern).

However, steerable radio beams increase this task’s complexity. Imagine a scenario with two people sitting on a bench in the local park. In a 3G or 4G setting, both will be exposed — from head to toe — to the electromagnetic radiation emitted by mobile antennae in their vicinity. But, in a Massive MIMO context, due to the beam steering effect, individuals might experience totally different EMF exposure levels — even if they are only a few feet apart.

In this article, novel tools and models for Massive MIMO EMF exposure estimation are presented, as well as compared to existing approaches. We also provide more background on the EMF exposure measurements conducted at Europe’s first real-life Massive MIMO-enabled 5G New Radio (NR) trials in the 3.5 GHz band. Finally, we make a first attempt at interpreting those numbers, using the exposure standards from the International Commission on Non-Ionizing Radiation Protection (ICNIRP).

In a 4G setting, antennae typically radiate in one broad beam of 120°. Massive MIMO-enabled 5G networks, however, foresee in a spatial channel for each user. Complex pre-coding techniques are used to alter the radio signal’s amplitude and phase, allowing beams to be steered in specific directions. As such, users can be provided with a personal hotspot.

To get a better understanding of these pre-coding mechanisms, and to assess their impact on the creation of electromagnetic fields, our research group performed several simulations and validated the resulting data in our labs.

An indoor industrial setting was mimicked, crammed with metallic objects — and with an additional metal plate positioned between the 5G antenna and 19 (virtual) users (Fig. 1). For testing purposes, the Massive MIMO base station was equipped with 36 antenna elements per user.

Testing showed that each pre-coding strategy effectively enables the creation of a personal radio beam or hotspot, making for excellent mobile connectivity, even in the most challenging network conditions. At the same time, Massive MIMO’s user-centric approach appeared to make EMF exposure measurements considerably less predictable.

As explained earlier, in a 3G or 4G scenario, EMF exposure primarily depends on the antenna’s distance and the direction of the radio signal. However, in the case of 5G, users’ interaction with their smartphones becomes an important factor, too. As such, much of the international community’s existing knowledge on mobile networks’ EMF generation has become outdated.

A Novel Way to Measure Maximal and Average EMF Exposure

Massive MIMO-enabled networks use two types of beam to tune the radio signal to a user’s location: a control beam (to check the user’s location) and the actual user beam. To accurately calculate 5G’s EMF values, both beams need to be checked and accounted for.

Our research sought a novel way to determine both the maximal and the average EMF exposure — with the maximal exposure being defined by meticulously registering the control beam and multiplying it by a factor of x (for instance, 100 percent, if you assume that one user is using the signal exclusively).

To do so, detailed in-band measurements (in this case, in the 3.5 GHz band) typically must be performed, determining both the control and user signals’ parameters. While today’s approaches typically require these parameters to be provided by the operator, we have managed to calculate them. Based on that information, the signal can be reconstructed, after which the average and maximal exposure can be calculated.

We found that, using a classical spectrum analyzer, these measurements can be performed independent from an operator — with few data, and in a cost-efficient manner (as a spectrum analyzer is several orders of magnitude cheaper than today’s dedicated solutions). Moreover, it can be used to accommodate measurements in 3G, 4G, and 5G networks.

Following a series of experiments (in our labs and two times in situ), we can confirm this novel methodology results in measurements in-line with the numbers that would be obtained using more expensive equipment.

To confirm our findings, experiments were conducted at 5G test sites in the cities of Düsseldorf and Lille. Different scenarios — ranging from a telephone call and a video chat to loading the network to its theoretical maximum — were evaluated (Fig. 2).

At a distance of 60 to 70 meters from the 5G base stations, following EMF radiation levels were registered: 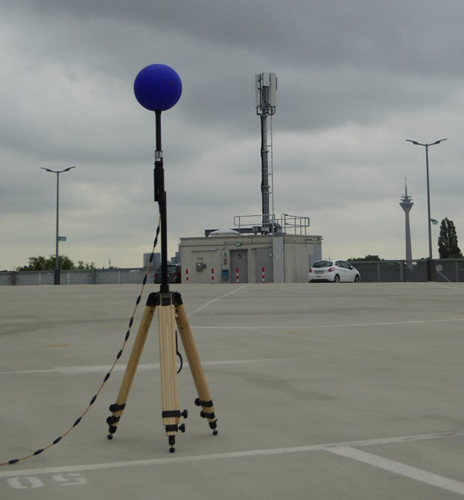 These measurements indicate that people interacting with their smartphones — and thus making use of a dedicated 5G radio beam — may experience higher (local) electromagnetic radiation values. But, people not using the 5G network seem (on average) to be subjected to less radiation than in a 4G network environment. In other words, 5G might make for a global reduction of mobile networks’ EMF exposure, not in the least since its introduction is an opportunity to rethink and optimize the entire network and to reduce the radiation emitted by certain antennas.

Still, more research is needed in this area. For example, the tests were conducted on pilot networks, using early versions of 5G, with a small number of users and limited data traffic. However, as soon as COVID-19 travel bans are lifted, we will conduct tests in Australia and Switzerland where commercial 5G networks have been rolled out. This will provide us with even more accurate data. We think this will be crucial to the further development and adoption of 5G technology.

In many countries, the general public has expressed concern about the electromagnetic radiation generated by 5G networks — an issue further complicated due to the different local and international metrics/standards applied.

From a scientific point of view, the World Health Organization (WHO) has issued the golden standard, based on ICNIRP guidelines. This standard considers the scientifically proven effects of being exposed to mobile networks’ electromagnetic radiation (i.e., warming of the brain if you hold your phone close to your head for a long period of time).

The WHO standard is 41 V/m (for the 900 MHz frequency), which equals a value of 61 V/m at the 3.5 GHz frequency. It is important to note that this standard includes a safety margin of a factor of 50.

While the WHO standard has been adopted by many countries (including The Netherlands), other countries and regions have opted for more conservative standards. The Belgian region of Flanders, for instance, uses a standard of 3 V/m per antenna (at 900 MHz).

As far as Flanders is concerned, the current metric of V/m per antenna has clearly become obsolete. A new metric and standard, adapted to new technologies (such as massive MIMO) and taking into account the higher frequencies 5G will use, are in the pipeline already. Internationally, a similar exercise will be required as other technologies (e.g., mmWave) are introduced.

It is clear that, contrary to its predecessors, a 5G network puts active users center stage. While this has a positive impact on signal quality, it also makes for less predictable EMF radiation patterns.

One of our key observations is that people interacting with their smartphone — and thus making use of a dedicated 5G radio beam — may experience higher (local) EMF exposure. But, people not using the 5G network seem (on average) to be subjected to less radiation than is the case with 4G networks.

Both above findings might significantly impact the way 5G networks should be planned and rolled out. Again, though, additional research is needed to assess the exact impact of 5G in this domain.

Wout Joseph is professor at WAVES, an imec research group at Ghent University (Belgium). An expert in the domain of experimental characterization of wireless communication systems, he received his M. Sc. degree in electrical engineering from Ghent University in July 2000 and a PhD degree from the same university in March 2005. His professional interests include electromagnetic field exposure assessment, in-body electromagnetic field modelling, electromagnetic medical applications, propagation for wireless communication systems, IoT, antennas and calibration.