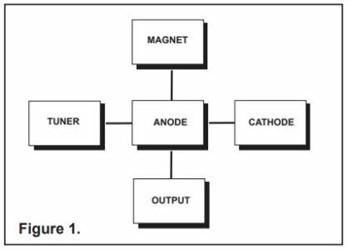 A magnetron is a high power microwave oscillator in which the potential energy of an electron cloud near the cathode is converted into RF energy in a series of cavity resonators. As depicted by the low frequency analog, the rear wall of the structure may be considered the inductive portion, and the vane tip region the capacitor portion of the equivalent resonant circuit. The resonant frequency of a microwave cavity is thereby determined by the physical dimension of the resonator together with the reactive effect of any perturbations to the inductive or capacitive portion of the equivalent circuit.