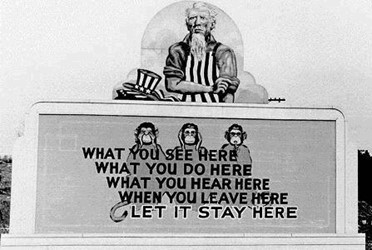 This Christmas, my wife bought me a beautiful acoustic guitar. My best friend helped pick out the instrument, several other people were aware of it, and even my notoriously loose-lipped seven-year-old knew what was in the biggest box under the tree. But no one said a word, and I was genuinely floored on Christmas morning.

Thus, here is my salute to the secret-keepers.

Large swaths of the RF/microwave industry are shrouded in secrecy. Military and defense contracts comprise substantial amounts of many companies’ income; indeed, some tech companies rely 100 percent on military and defense contracts. And, when rushing products to market, global tech firms embrace the mantra of the titular character from the film Talladega Nights: The Ballad of Ricky Bobby: “If you ain’t first, you’re last.” These entities employ some of the world’s premier researchers, engineers, mathematicians, chemists, physicists, etc. — and among those folks’ greatest talents is silence.

Of course, no project is immune to slip-ups. The Manhattan Project, which produced the first nuclear weapons, dealt with more than 1,500 leaks and more than 1,200 cases of mishandled classified materials. In our modern society, good journalism drags politicians’ skeletons from their closets, and bored criminals upload celebrities’ intimate pictures to the internet. Even tech giant Apple took a hit this past October when a company engineer’s daughter posted a YouTube video of the iPhone X, days before its official release.

So, it is left to great minds to maintain information security in the name of profit, national security, or both. “Leaks could cost a person their job, or even result in criminal charges; not leaking is pretty easy, viewed in that context,” you might say. I would agree with you — to an extent.

Consider that even Department of Defense (DoD) contracts have an element of public transparency. Calls for technology by the Defense Advanced Research Projects Agency (DARPA), as well as other government and private entities, must be specific about what they’re seeking. Subcontractors get involved. That leads to lots of potential “loose ends” where leaks could occur, and there is no shortage of amateur or professional sleuths looking into these contracts and projects, in the name of public interest, competitive advantage, or even corporate sabotage.

The most obvious example of such cloak-and-dagger operations is the Manhattan Project. The gravity of its need for secrecy has been immortalized in the banner image above, taken at Los Alamos, N.M. – one of three locations where the U.S. government developed the bombs (similar signs were posted at Oak Ridge, Tenn., and Richland, Wash.).

A more recent example — to which many of you reading may have contributed technology — is the Boeing X-37B Space Plane (also called the Orbital Test Vehicle, or OTV). The Pentagon’s autonomous space drone already has flown four (mostly) clandestine missions, its most recent a 718-day trek through space that ended in May 2017. The OTV launched for a fifth time on Sept. 7, 2017, and a sixth mission is planned in 2019.

The fourth X-37B mission installed a military satellite into low-earth orbit (LEO), but the satellite’s purpose and exact orbit remain a mystery — though it has been speculated, based on NRO’s unorthodox announcement that Ball Aerospace procured the launch contract, that the craft is carrying experimental optical or radar sensor equipment.

“It’s clear that any technologies tested on an Air Force spaceplane will have some military application, but that doesn’t narrow things down much. In space, it could mean communications, navigation, surveillance, or even anti-satellite and counter-anti-satellite operations. The smart money is on advanced surveillance sensors,” mused Smithsonian’s Air & Space Magazine during that fourth mission.

The L.A. Times hits the nail on the head in describing the need for such secrecy on the taxpayer dime: “defending the ultimate high ground should war break out in space.” Officially, though, the USAF states that the X-37B’s role is to test "reusable spacecraft technologies for America's future in space and operating experiments which can be returned to, and examined, on Earth."

Makers of consumer devices, too, clamp down on leaks with military precision. Apple, for example, draws anti-leak investigators from agencies like the NSA, FBI, and Secret Service to police both internal and supply chain threats to information security.

The downside of all this secrecy often includes unchecked spending and, in some cases, loss of life.

Starting with cost, the $1 trillion F-35 Joint Strike Fighter project has drawn the ire of nations involved in its development by being at least five years overdue (it was originally slated to be combat-ready by 2012) and billions of dollars over budget.  While U.S. President Donald Trump called the project’s costs “out of control” last February, it has pressed forward and, to date, has delivered more than 265 F-35 aircraft to U.S. and international customers, according to Lockheed Martin.

Still, during its decade-plus of development, the F-35 has had its design data hacked and obtained by foreign powers; its “joint strike fighter” tag has been revealed as a farce; and China claims to have developed “quantum radar” that will render the aircraft’s stealth capabilities obsolete. It’s impossible to predict whether more public accountability could have helped the project progress more smoothly but, at the least, it could have reined in some spending from the taxpayer-funded checkbook.

Meanwhile, the death of USAF Lt. Col. Eric Schultz in a Sept. 5, 2017, crash near Nellis AFB remains shrouded in mystery. Specifically, it’s unknown what type of aircraft Schultz was flying. USAF Gen. David L. Goldfein, Chief of Staff of the Air Force, told Military.com that the plane “was not an F-35,” but did not elaborate further.

It’s been speculated that the aircraft was a Flanker derivative of the Russian Su-27 (used as part of a program training USAF pilots tactics to combat foreign aircraft), but that information is unlikely to ever be confirmed.

Yet, through scandal and through tragedy, we continue to keep our industries’ secrets — ostensibly, for the greater good. Whether it’s a matter of national security or commercial success, a space plane or a sensor, brilliant people regularly refrain from trumpeting their astounding scientific achievements. And we’re better off for it, even if it doesn’t feel that way sometimes.