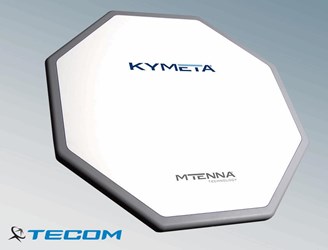 Kymeta Corporation, a metamaterials-based antenna technology startup based in Redmond, Wash., has raised $73.5 million in financing to develop and commercialize its software-steered antennas for the global mobile communications market.

A filing with the Securities and Exchange Commission states a total of $73,576,847 in equity funding. An undisclosed portion of the investment came from satellite services provider Intelsat, which last month acquired an undetermined equity stake in Kymeta, according to GeekWire. The two companies started their partnership in 2015 to design and produce flat, electronically-steerable, Ku-band mTenna satellite antenna solutions that are optimized for the Intelsat EpicNG high-throughput satellite (HTS) platform.

“We are only a modest portion of the equity raise,” Dianne VanBeber, Intelsat’s VP of investor relations and communications, told GeekWire. “We are not disclosing the exact amount, but it was not at a level of materiality such that we would have needed to disclose it in our annual filing with the SEC.”

Kymeta raised $62 million in a funding round last year from Bill Gates and other investors, reports The Seattle Times. The latest financing brings the total amount invested in the company to nearly $200 million.

Intelsat, which merged last month with OneWeb to build what they claim to be the world’s first truly global broadband network, inked a separate deal with Kymeta in early March to launch the new KALO satellite service, which will use Kymeta's mTenna antenna subsystem modules (ASMs) and fully integrated KyWay Terminals.

KALO services will be offered in by-the-gigabyte plans and are designed to move seamlessly between Intelsat EpicNG satellites, the first of which, Intelsat 29e, was launched in March 2016. It is to be followed by Intelsat 32e, Intelsat 35e and Intelsat 37e in 2017, and Horizons 3e, which is scheduled to launch in the second half of 2018.

Kymeta mTenna ASMs and KyWay Terminals will make satellite spectrum viable for mobile communications where it has never been possible before – in cars, boats, train, planes – anything that moves that needs to be connected to the internet, according to the company.

Slated for commercial trials in May, Kymeta mTenna satellite technology seeks to replace the traditional beam-steering mechanisms — such as gimbals and phased arrays — with light, thin, and flat Ku-band antennas made of metamaterials that enable electronic RF beam-steering in manual or automatic modes with polarization selection and angle control, with absolutely no moving parts and low power requirements. mTenna technology features a weather-facing flat radome, eliminating the bulky legacy radome, reducing weight and complexity for easy maintenance and installation.

The antennas cost about $15,000 apiece and is about the size and shape of a stop sign, according to The Seattle Times.