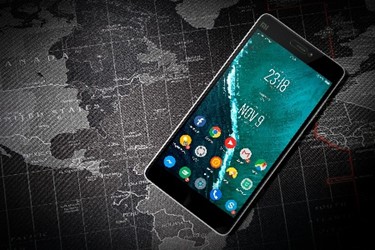 Researchers from Graphene Flagship Partners at the National Inter-University Consortium for Telecommunications (CNIT) in Italy, IMEC in Belgium and University of Cambridge in UK created and tested a graphene based phase modulator that outperforms existing silicon based ones.

Modern optical data and telecommunication employ phase modulators to increase the amount of data relayed and data rate efficiency, i.e. the speed at which information is relayed.

Phase modulators may work by grouping several bits of information into fewer symbols, or packets, reducing the overall size, or spectral width. The smaller the spectral width, the higher the data rate efficiency. However due to a natural trade-off this efficiency is reaching a maximum with silicon based devices, hence a more novel solution is needed to bridge the gap between the increase in demand for data and the efficiency in transmitting it.

This novel solution has come in the form of graphene. Graphene is ideally suited to integrate with pre-existing silicon photonics, due to its large optical modulation and high-speed operation.

The multi-national collaborative team, headed by Marco Ramagnoli of Graphene Flagship partner the National Inter-University Consortium for Telecommunications (CNIT), conducted several tests to see the efficiency of a graphene based modulator. A single layer of graphene was grown, via chemical vapour deposition, and transferred onto a silicon photonic platform. Romagnoli explains, “A small piece of graphene was placed on top of the silicon like an adhesive tape. This made the resulting phase modulator work at any wavelength and the spectral efficiency was ten times more than that of a state of the art silicon phase modulator.”

This hybrid phase modulator can have lower optical losses, reduced energy consumption and error-free bit operation for up to 50 km transmission distance. Furthermore, by optimising processes and device geometry the radio frequency bandwidth could be raised to match high-end existing modulators.

With the eyes of the world shifting towards faster and higher rates of data streaming in the form of 5G technologies, this could be a potential cost-effective method of delivering. “From the point of view of a customer,” continues Romagnoli, “you want to watch films and other things on mobile devices, but don’t want to increase what you pay to the operator. So this means you want to increase the performances, bandwidth, but at the same time you want to reduce the cost per data bit. We have to find the technology that is scalable in performance but is, at the same time, cheaper.”

“That is why we believe that graphene is a good candidate…This, as an experiment, is very simple and very inexpensive,” added Romagnoli.

This technology also may hold the key to reducing the carbon footprint of mobile technology as Daniel Neumaier, leader of Division 3, based at Graphene Flagship partner AMO GmbH, explains, “Optical communication systems form the backbone of the world wide web, which already now contributes significantly to the global CO2 footprint. This work demonstrates that graphene based optical phase-modulators could become key components of optical data links in order to reduce the energy consumption. The reported modulation efficiency, which is one of the decisive key parameters for the overall energy consumption, is already outperforming conventional silicon based modulators. The next crucial step in order to bring this device towards applications is the wafer scale CMOS integration. This challenge is currently addressed by leading European research centres and companies within the Graphene Flagship.”

The results are a very promising start for the use of graphene/graphene-silicon hybrids in the application of telecom and data communication where phase modulators are key.

Professor Andrea C. Ferrari, Science and Technology Officer of the Graphene Flagship, and Chair of its management panel added: "Photonics and Optoelectronic applications have been identified as having great application potential since the very start of the Flagship. This work demonstrates that this technology is competitive with and can surpass the state of the art. This work already underpins a spearhead project targeting a~400Gbit/s data link for 2020, ready to be integrated in the business units of telecom and datacom companies"

About The Graphene Flagship
The Graphene Flagship was launched by the European Union in 2013 as part of its largest research initiative ever. With a budget of €1 billion it represents a new form of joint, coordinated research initiative. The overall goal of the Graphene Flagship is to take graphene and related materials from the realm of academic laboratories into European society, facilitating economic growth and creating new jobs. Through a combined academic-industrial consortium consisting of more than 150 partners in over 20 European countries, the research effort covers the entire value chain, from materials production to components and system integration, and targets a number of specific goals that exploit the unique properties of graphene and related materials.