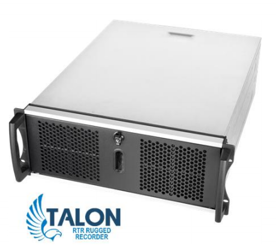 The Talon RTR 2757 is a turnkey system designed for recording 200 Gigabit Ethernet UDP streams. It is designed to capture digitized data from four of these streams in real time at the full 100 Gigabit per second rate. With up to 122 TB of removable solid-state storage, the RTR 2757 provides hours of multi-channel wideband signal recording.

The RTR 2757 provides an interface that matches the Quartz Ethernet UDP protocol and can accept up to four independent UDP data streams. This allows users to stream four A/D channels independently over 100 Gigabit Ethernet and capture them as independent files on the recorder. The recorder captures only the payload, providing data files similar to other Talon recorders. This allows the suite of SystemFlow software tools to be used for signal analysis prior to, during, and after a recording session.

For additional information on the Model 2757, download the datasheet.