Energy Efficiency In The Telecommunications Network 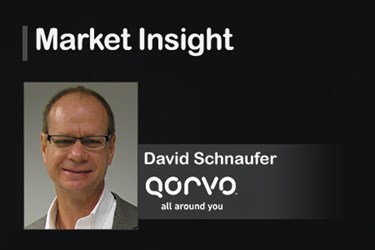 Initiatives by the United States, European Union (EU), and Asia to reduce CO2 emissions from current values, serve the dual purpose of decreasing the telecommunication industry's energy consumption and its output of greenhouse gases.

Ultimately, though, to truly impact greenhouse gas emissions, all countries will need to unite.

According to an IEEE-published article on broadband communications, the telecommunications sector accounts for roughly 4 percent of the global electricity consumption.[1] However, the sector is actively participating in efforts to reduce energy use – both for economic reasons, such as reducing operating expenses, and for environmental reasons.

To this end, the telecommunications sector is participating in initiatives like the Energy Aware Radio and network TecHnologies (EARTH). Projects like EARTH pinpoint telecom-specific energy usage in the network infrastructure arena. By partnering with operators, research institutions and universities, EARTH's coordinated knowledge helps influence our future network designs, with the goal of reducing mobile and wired CO2 emissions.

Historically, the focus for energy use reduction in the mobile arena has been on mobile device battery life. Mobile consumers are the biggest influence in this trend. According to phoneArena, smartphone battery life has improved from 310 average minutes to 430 over the course of five years.

To minimize current draw on a device battery, the telecom industry can use advanced RF design techniques, such as antenna tuning; highly linear and efficient PA designs with envelope tracking; adaptive transmit power control; radio aware software management; and fundamental improvements to semiconductor processes and integration. However, the power consumption focus is quickly broadening to include the entire mobile network.

Smartphones, laptops, tablets, and digital smart TVs are the beginning of the information-communications-technologies (ICT) ecosystem rise in large data consumption and backhaul roll-out. The increase in data flowing through these devices is increasing the mobile ecosystem's energy consumption. According to the International Telecommunications Union (ITU), the network backbone uses about 10 percent of ICT ecosystem energy — the same amount of energy used to light the entire planet in 1985. We now use more energy moving bytes from location to location than we do to move planes in global aviation.

Energy Efficient Solutions In Base Stations 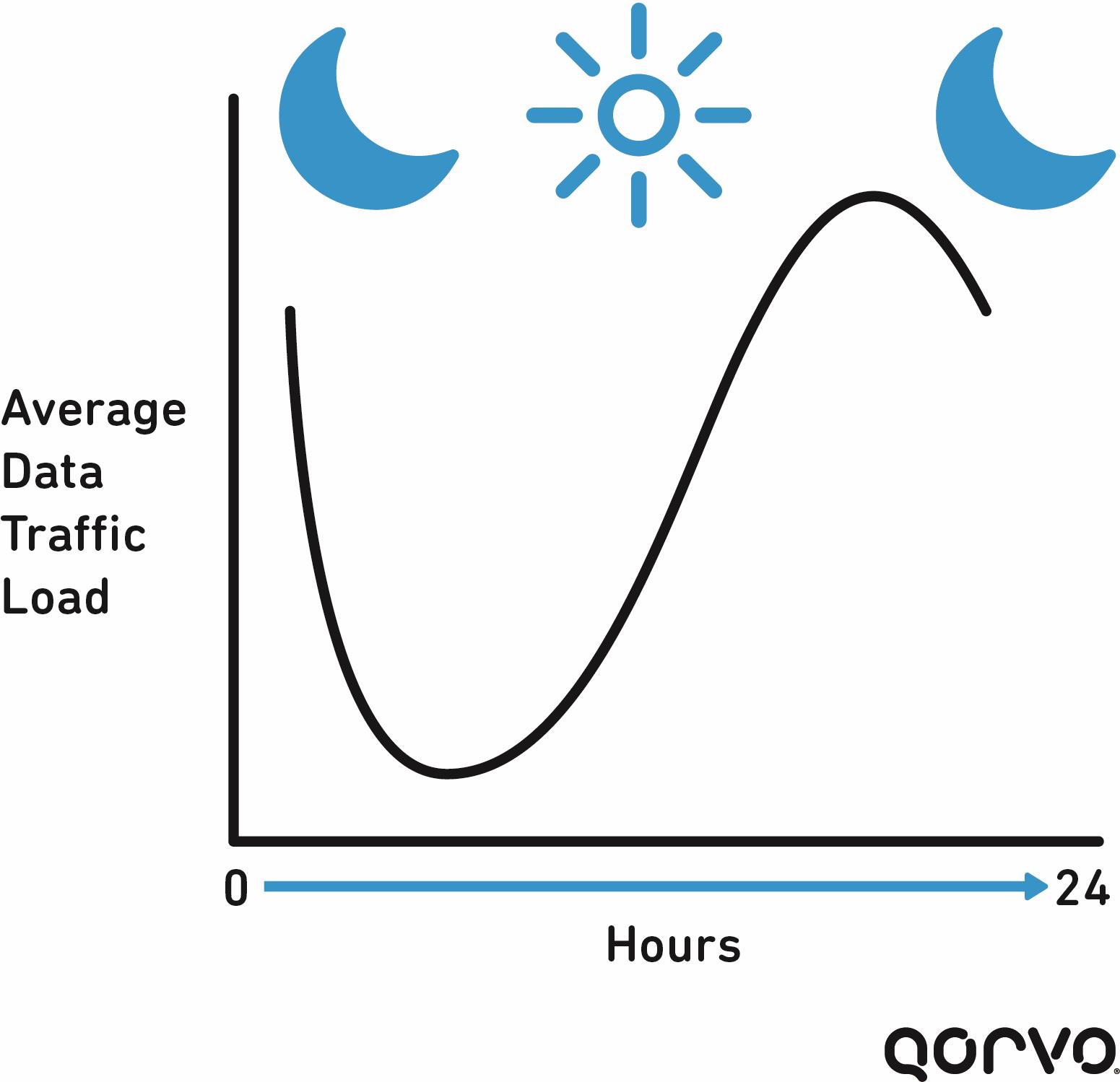 Base stations have been designed to address peak capacities, minimizing downtime and optimizing user experience. But in reality, networks that are energy efficient at heavy load conditions are far less efficient-per-bit at lower load conditions. As it turns out, it is very common during any given 24-hour period for a cellular network's load to be low, rather than at its peak - daily load levels are very uneven.

A good portion of the time, a small amount of user data is being transmitted, and reducing power consumption during these low traffic times —using adaptive radio network designs — will significantly lower operator costs and CO2 emissions. Techniques such as antenna muting (multi-antenna transmissions activated when there is user data to transmit), network small cell deployments, and power-saving mode radio network enhancements are just a few ways to aid in the reduction of power consumption. 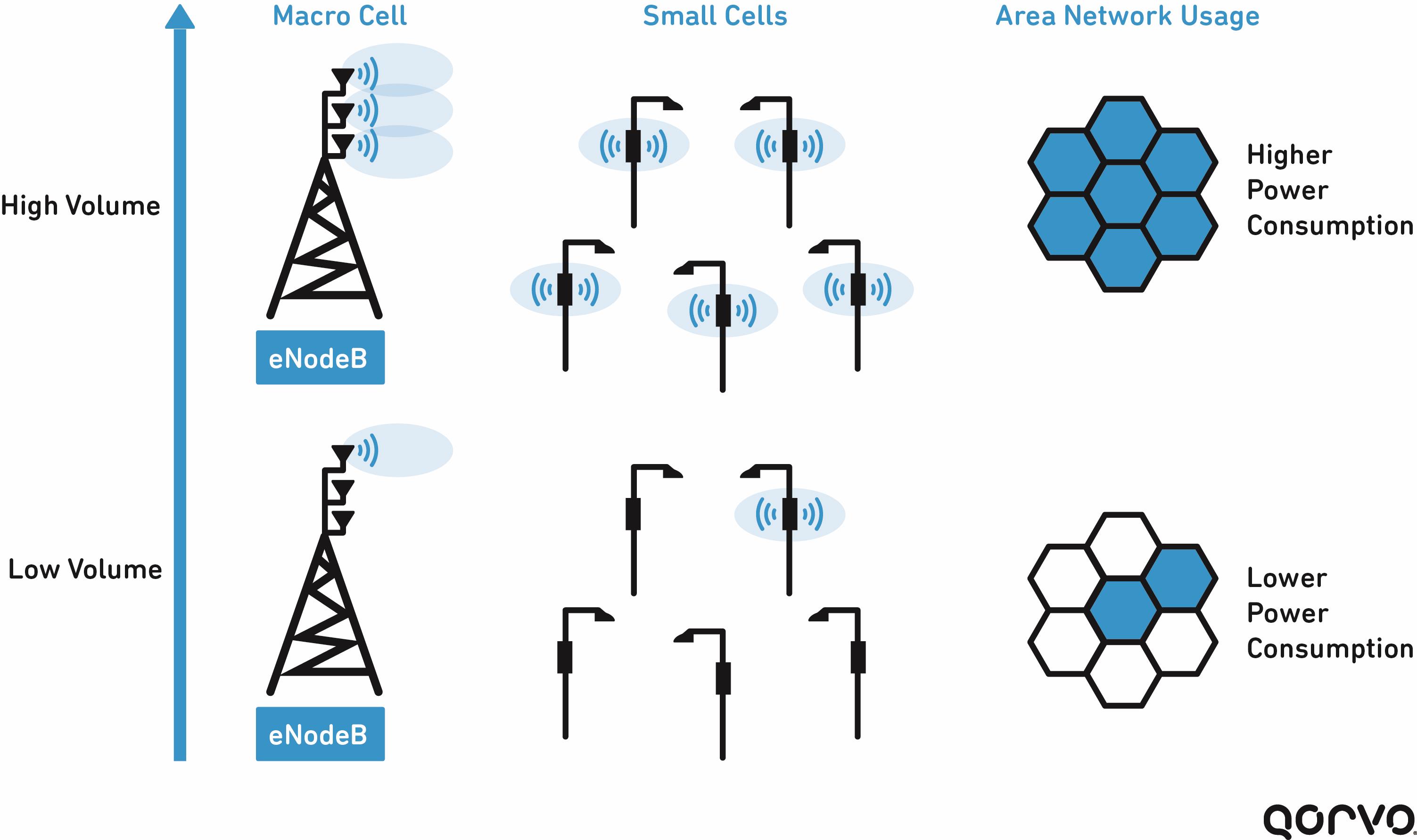 Power-saving modes can extend from minutes to hours, and are very effective in reducing power consumption. This form of power reduction reduces power consumed, as well as radiated heat from the radio. The challenge with powering down the radio is waking it up. Waking up the radio may not be instantaneous; therefore, radio designers need to mitigate any latency impacts and network disruptions.

The introduction of small cells helps lower network operating costs, as these smaller base station designs are passively cooled, provide network edge coverage, and operate at a much lower radio power. The benefits to the user are increased battery life and capacity, due to the shorter propagation and close proximity to the mobile device. The benefit to the operator is the ability to add needed capacity to specific hot spots, optimizing energy cost. Carriers can choose from several varieties of small cells (Femtocell, Picocell, or Microcell, for example) depending on power level and range requirements, keeping power levels at a minimum while providing higher quality connections with higher throughput and lower latency.

Macro base stations are also becoming much more efficient. The robustness and reliability of active radio components have increased dramatically over the last decade, enabling all outdoor tower-top installations using remote radio head units. Remote radios require only passive cooling and minimize feed losses due to their proximity to the antenna. By reducing feed losses, the transmitter can be half the power and still deliver the same performance at the antenna. In addition, the receiver noise figure is improved, and the mobile unit can transmit less power for the same signal-to-noise ratio.

From an energy consumption point of view, this architecture allows more users to be served by a single base station. It also reduces the power amplifier requirements in two ways: First, the total conducted power of the base station is now divided among a large number of smaller amplifier modules that are spread over a larger backplane area, making passive cooling easier. Second, and perhaps more critical, the large active array can synthesize highly directive pencil-beam patterns that provide a significant increase in antenna gain. This implies that, for an equivalent effective isotropic radiated power requirement, the conducted power from each power amplifier can be much lower. The combination of higher capacity and extended reach could also lead to fewer additional base stations and lower network energy consumption overall.

Cloud-based radio access network (C-RAN) architectures and radio function virtualization also are impacting energy consumption. These architectures centralize the software stack and latency insensitive portions of the baseband processing from multiple base station sites. This allows the computed resources to be pooled and shared more efficiently as traffic demand ebbs and flows throughout the day. It also reduces the amount of processing needed at each base station site and/or in the remote radio head.

Energy consumption and global populations both continue grow, placing an energy burden on our globe.

Global energy consumption for future fixed and wireless networks will rise. Future heterogeneous networks (HetNets) — consisting of strategically placed small cells, as well as technological advanced macro base stations — will be needed to address the concern of power consumption and decrease operational expenses. By continuing to leverage technology advancements like Mass-MIMO, envelope tracking, Doherty design GaN PAs, RRHs, and others, communication engineers have placed the cellular industry on a trajectory to a "greener," lower CO2 emission future.

In our next quarterly marketing insight article, we will further explore the infrastructure network arena and the ongoing inventions to further improve consumption efficiencies in RF front-end design.