Did We Just Discover 87 Of The Universe's Most Distant Galaxies Or Not? 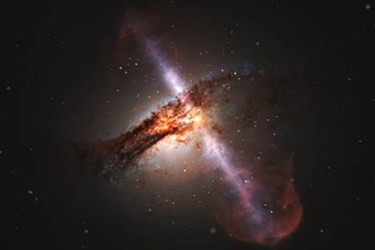 Astronomers say we’re one step closer to determining how and when galaxies first appeared in the universe – about 300 million years ago, give or take 100 million years – thanks to data mined by University of Missouri researchers from NASA’s James Webb Space Telescope. But what technology is Webb using to mine this data and is the data accurate?

A University of Missouri (go Tigers!) team of astronomers, using data from NASA’s James Webb Space Telescope (Webb) Early Release Observations, discovered 87 galaxies that could be the earliest known galaxies in the universe, according to a Mizzou release.

“Finding such a large number of galaxies in the early parts of the universe suggests that we might need to revise our previous understanding of galaxy formation,” said Haojing Yan, associate professor of physics and astronomy at MU and lead author on the study. “Our finding gives us the first indication that a lot of galaxies could have been formed in the universe much earlier than previously thought.”

This discovery and others like it suggest that “the earliest stellar metropolises are more mature and more numerous than expected,” according to Sky & Telescope. “The results may end up changing what we know about how the first galaxies formed.”

Earlier studies, including those done using the Hubble Space Telescope, “had suggested that as we look back toward a younger universe, the stable rotating disks of today give way to more chaotic shapes, representative of the violent mergers that built up the first galaxies,” Sky & Telescope writes. “Then again, those previous studies also had a hard time classifying the most distant ones, which looked like little more than smudges. That’s where Webb’s telescope comes in.”

Infrared To The Rescue

Webb launched on December 25, 2021, is the most powerful space telescope ever built. The mission’s objectives are to observe farther into the universe than ever before, search for the first stars and galaxies created after the Big Bang, better understand how planets, stars, and galaxies are born and evolve, explore distant worlds and study our solar system, and determine the potential for life on planets around other stars.

Webb differs from its predecessor*, the Hubble Space Telescope, in many ways. For instance, Webb has capabilities that allow it to perform science that Hubble is not able to do. Webb’s telescope is larger, as is its mirror. But the key difference – the one that is allowing researchers to make discoveries – is Webb’s ability to better observe infrared light.

“Webb uses infrared light, which cannot be perceived by the human eye, to study every phase in cosmic history,” writes the Government of Canada, part of the international collaboration (along with NASA and ESA) responsible for Webb’s mission. “The telescope’s four scientific instruments are specifically designed to capture infrared light and can peer through cosmic dust to study colder or very distant objects.”

Hubble can observe near-infrared light but focuses mainly on the light that is visible to the human eye while Webb can see through cosmic dust to study colder or very distant objects. “ Because infrared light wavelengths are longer than those of visible light, they can penetrate dust clouds more easily, which allows astronomers to peer inside nebulae to see newly forming stars and planets that would otherwise remain hidden,” notes the Government of Canada. “The very first galaxies ever created in the universe are best observed in infrared. Since those galaxies are very distant, their light has been stretched, in a phenomenon known as redshift, to infrared wavelengths by the time it reaches Webb.”

* Predecessor may not be the correct choice of word as the Hubble Telescope is still in operation. It and Webb complement each other in several ways and the two missions overlap so that they can work together on discoveries. Estimates are that Hubble, launched more than 20 years ago, will continue its work until at least 2030 while Webb is expected to last until about the same time. Maybe Hubble will outlast Webb?

So, What Is Redshift?

Redshift, according to NASA, means that the light emitted by the first stars and galaxies as visible or ultraviolet light gets shifted to redder wavelengths by the time we see it here and now. For very high redshifts (i.e., the farthest objects from us), that visible light is generally shifted into the near- and mid-infrared part of the electromagnetic spectrum. For that reason, to see the first stars and galaxies, we need a powerful near- and mid-infrared telescope, which is exactly what Webb is.

Let’s use the University of Missouri study to illustrate how Webb measures redshift. Yan said the concept of redshift in astronomy allows astronomers to measure how far away distant objects are in the universe — like galaxies — by looking at how the colors change in the waves of light that they emit.

Yan noted that Edwin Hubble’s ate-1920s discovery that our universe is ever-expanding is key to understanding how redshifts are used in astronomy, saying Hubble “confirmed that galaxies external to our Milky Way galaxy are moving away from us, and the more distant they are, the faster they are moving away. This relates to redshifts through the notion of distances — the higher the redshift an object is at, such as a galaxy, the further away it is from us.”

Therefore, Yan said, the search for galaxies at very high redshifts gives astronomers a way to construct the early history of the universe. As the speed of light is finite it takes time for it to travel over a distance to reach us. So, when we look at galaxies that are very far away, we look at their images from a long time ago. Using this concept, Yan’s team analyzed the infrared light captured by Webb to identify the galaxies.

“The higher the redshift a galaxy is at, the longer it takes for the light to reach us, so a higher redshift corresponds to an earlier view of the universe,” Yan said. “Therefore, by looking at galaxies at higher redshifts, we are getting earlier snapshots of what the universe looked like a long time ago.”

Yan believes his team’s discovery is just the tip of the iceberg because the data used only focused on a very small area of the universe. He anticipates other teams of astronomers will find similar results elsewhere in the vast reaches of space as Webb continues to provide researchers with a new view of the deepest parts of our universe.

On The Other Hand

Ethan Siegel, writing for Big Think, doesn’t dispute Yan’s and other researchers’ science but he does question their findings. “Just because you see something that’s red doesn’t mean it’s an ultra-distant galaxy. Many signals can fool you:

Siegel writes spectroscopy, much finer than photometry, needs to be used. “Instead of a few wide ‘bins’ that span a variety of wavelengths, we break the light up into incredibly fine components, enabling us to discern differences in flux over tiny fractions of an angstrom,” Siegel writes. “In particular, we look for a feature known as a Lyman break: corresponding to the most powerful atomic transition of hydrogen: from the second-lowest energy level down to the ground state.

“We know that always occurs at the same wavelength: 121.5 nanometers. If we can measure that feature and measure the observed wavelength at which it appears, we can just do a little math to determine, unambiguously, the unique and intrinsic redshift of the distant object in question.”

Only by gathering critical spectroscopic data can we answer the question of how many of the 87 newly discovered galaxies are real. “In other words,” asks Spiegel, “how many of them aren’t just ‘candidates’ for being ultra-distant galaxies but are actually ultra-distant galaxies, rather than impostor objects that exist at lower redshifts? Is it all of them? Most of them? Some of them? Or only a few?”

OK, JADES To The Rescue Then

Webb already has both photometric and spectroscopic data in hand thanks to the JWST Advanced Deep Extragalactic Survey (JADES) which takes a region of space already observed at high resolution, in many filters, and over long periods by Hubble, and adds a layer of JWST photometric data atop it.

“By using both Hubble and JWST photometric data combined, they identified a series of potentially ultra-distant galaxy candidates. The exact number has not been published, but we know there were tens of candidates that were considered for follow-up observations,” Siegel reports. Four galaxies were identified to be robustly at ultra-high distances but all were determined to have emitted light at least 320 million years after the Big Bang removing them from contention as the universe’s earliest galaxies.

“If all 87 of the ultra-distant galaxy candidates found in the field of SMACS 0723 turned out to be ultra-distant galaxies — if they later turn out to be spectroscopically confirmed — then this observation poses a significant problem for the standard picture of how cosmic structure forms in the universe,” writes Siegel. “There simply shouldn’t be such a large number of bright, massive, and already-evolved galaxies at this early stage in cosmic history.”

Siegel concludes that of the 87 newly-discovered galaxies “it’s a safe bet that some of them truly are ultra-distant galaxies. I’d even be willing to bet that at least one of those candidates is more distant than the current cosmic record holder for the most distant galaxy: JADES-GS-z13-0.

“But without the critical spectroscopic data on these galaxies — enabling a measurement of the false positive rate from photometric candidates — we have no way of knowing whether a few of these galaxies, many of them, most of them, or even nearly all of them are less-distant impostors, tricking our inexperienced eyes into thinking they’re more distant than they are.”