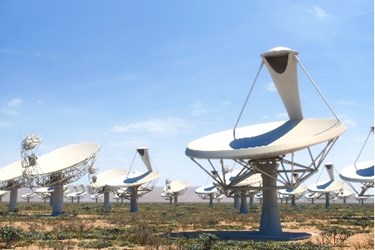 An international group of scientists led by the University of Cambridge has finished designing the ‘brain’ of the Square Kilometre Array (SKA), the world’s largest radio telescope. When complete, the SKA will enable astronomers to monitor the sky in unprecedented detail and survey the entire sky much faster than any system currently in existence.

The SKA’s Science Data Processor (SDP) consortium has concluded its engineering design work, marking the end of five years’ work to design one of two supercomputers that will process the enormous amounts of data produced by the SKA’s telescopes.

The SDP consortium, led by the University of Cambridge, has designed the elements that will together form the ‘brain’ of the SKA. SDP is the second stage of processing for the masses of digitised astronomical signals collected by the telescope’s receivers. In total, close to 40 institutions in 11 countries took part.

The UK government, through the Science and Technology Facilities Council (STFC), has committed £100m to the construction of the SKA and the SKA Headquarters, as its share as a core member of the project. The global headquarters of the SKA Organisation are located in the UK at Jodrell Bank, home to the iconic Lovell Telescope

“It’s been a real pleasure to work with such an international team of experts, from radio astronomy but also the High-Performance Computing industry,” said Maurizio Miccolis, SDP’s Project Manager for the SKA Organisation. “We’ve worked with almost every SKA country to make this happen, which goes to show how hard what we’re trying to do is.”

The role of the consortium was to design the computing hardware platforms, software, and algorithms needed to process science data from the Central Signal Processor (CSP) into science data products.

“SDP is where data becomes information,” said Rosie Bolton, Data Centre Scientist for the SKA Organisation. “This is where we start making sense of the data and produce detailed astronomical images of the sky.”

To do this, SDP will need to ingest the data and move it through data reduction pipelines at staggering speeds, to then form data packages that will be copied and distributed to a global network of regional centres where it will be accessed by scientists around the world.

SDP itself will be composed of two supercomputers, one located in Cape Town, South Africa and one in Perth, Australia.

“We estimate SDP’s total compute power to be around 250 PFlops – that’s 25% faster than IBM’s Summit, the current fastest supercomputer in the world,” said Maurizio. “In total, up to 600 petabytes of data will be distributed around the world every year from SDP –enough to fill more than a million average laptops.”

Additionally, because of the sheer quantity of data flowing into SDP: some 5 Tb/s, or 100,000 times faster than the projected global average broadband speed in 2022, it will need to make decisions on its own in almost real-time about what is noise and what is worthwhile data to keep.

The team also designed SDP so that it can detect and remove manmade radio frequency interference (RFI) – for example from satellites and other sources – from the data.

“By pushing what’s technologically feasible and developing new software and architecture for our HPC needs, we also create opportunities to develop applications in other fields,” said Maurizio.

High-Performance Computing plays an increasingly vital role in enabling research in fields such as weather forecasting, climate research, drug development and many others where cutting-edge modelling and simulations are essential.

Professor Paul Alexander, Consortium Lead from Cambridge’s Cavendish Laboratory said: “I’d like to thank everyone involved in the consortium for their hard work over the years. Designing this supercomputer wouldn’t have been possible without such an international collaboration behind it.”

Source: The University of Cambridge