Can The U.S. Remain The World's Leading Military Technology Developer? 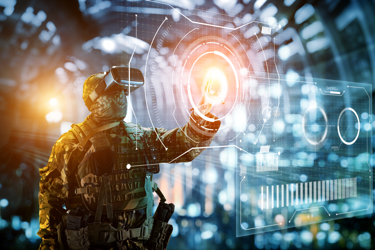 The U.S. has long been the most-innovate country in the world when it comes to developing military technology. How, with Russia and China closing the gap, will the U.S. maintain its advantage?

Former editor and all-around good person Abby Proch wrote about six emerging military technologies a while back. Abby cited a Congressional Research Service (CRS) report that lists those technologies as:

Abby concluded her article by writing, “Motivated by increasingly stiffer competition, the U.S. is investing heavily in military weaponry that pushes the boundaries of technology. Until now, the U.S. has remained a leader in those endeavors, with China and Russia nipping closely at (or already biting?) their heels. If progress is to be had, it will be with robust investment and with thoughtful leveraging of public-private advances and partnerships.”

So, what’s changed since that? Let’s take a look.

CRS, in its report Science and Technology Issues for the 118th Congress, writes, “The Department of Defense (DOD) relies on a robust research and development effort to develop new military systems and improve existing systems. Issues that may come before the 118th Congress regarding DOD’s S&T activities include budgetary concerns and the effectiveness of programs to transition R&D results into fielded products and how DOD encourages innovation.”

The DOD spends more than $100 billion per year on research, development, testing, and evaluation (RDT&E) with roughly 80% to 85% of it going to the design, development, and testing of specific military systems. The rest of the funding is spent on the DOD’s Science and Technology Program which includes activities ranging from basic science to demonstrations of new technologies in the field.

“The goal of DOD’s RDT&E spending is to provide the knowledge and technological advances necessary to maintain U.S. military superiority,” notes the report. This includes “ensuring that S&T — particularly basic research — receives sufficient funding to support next-generation capabilities, seeking ways to speed the transition of technology from the laboratory to the field, and ensuring an adequate supply of S&T personnel.”

CRS notes, “U.S. federal defense-related R&D funding’s share of global R&D funding has fallen from about 36% in 1960 to about 3% in 2020.” As a result, there are “concerns about the ability of the DOD to direct the development of leading technologies and to control which countries have access to it.

“Today, commercial companies in the U.S. and elsewhere in the world are leading the development of groundbreaking technologies in fields such as artificial intelligence, autonomous vehicles and systems, and advanced robotics.” This has led the DOD to build institutional mechanisms (e.g., the Defense Innovation Unit) and a culture for accessing technologies from nontraditional defense contractors. The report concludes by noting, “(The) DOD’s ability to maintain a technology edge for U.S. forces may depend increasingly upon these external sources of innovation for its weapons and other systems.”

Or Is Collaboration With The Private Sector The Answer?

CRS reports some believe the DOD has been slow to react and adapt to this new reality and, as a result, concerns have been raised that the U.S. military may be unable to maintain its historical technological advantages.

To alleviate these concerns, CRS writes, “Congress and the executive branch have adopted several reforms to address the perceived concerns, including the re-establishment of the position of Under Secretary of Defense for Research and Engineering, the expansion of other transaction authority, and the creation of new organizations (e.g., the Defense Innovation Unit and the Air Force’s AFWERX) and programs (e.g., the Rapid Innovation Program and the Accelerate the Procurement and Fielding of Innovative Technologies pilot program).”

CRS concludes its report by listing several considerations Congress could make, including, “The degree to which DOD is incorporating nontraditional contractors and small businesses into the defense industrial base.”

The National Security Agency (NSA), a part of the Department of Defense that coordinates, directs, and performs highly specialized activities to protect U.S. information systems, serves as an example of military/private sector collaboration. In its 2022 Cybersecurity Year in Review report, the agency revealed that it is expanding its work with the private sector, nearly tripling the number of industry partnerships to more than 300 in the past year.

This work is the responsibility of the Cybersecurity Collaboration Center (CCC), a hub for engagement with the private sector designed to create an environment for information sharing by combining expertise, techniques, and capabilities to secure the nation’s most critical networks. These collaborative relationships leverage the unique strengths of both government and industry and represent a vital part of a whole-of-nation approach to cybersecurity to:

According to the report linked above, “The CCC defends the U.S. Defense Industrial Base (DIB) and disrupts the adversary by sharing timely threat intelligence with high-impact partners, best positioned to scale detection and mitigation techniques to billions of endpoints. The CCC’s partners now reach a cumulative, estimated 2 billion endpoints, and its DIB prime partners account for 80 percent of Department of Defense (DoD) acquisition spending.”

The CCC also doubled its analytical exchanges with these partners and, with more than 10,000 bidirectional collaborations (primarily focused on Russian and People’s Republic of China cyber threats and responding to world events) billions of endpoints have been hardened against nation-state threats.

“For example,” the report’s author notes, “if NSA shares a nation-state actor’s malware or tactics, techniques, and procedures (TTPs) with an internet service/cloud provider with a global footprint, the provider can develop and deploy signatures to defend against the threat at scale. While the CCC’s primary goal is to defend the DIB, its efforts cascade protection across all 16 U.S. critical infrastructure sectors, reach businesses and consumers, and even protect our allies.”

And the military/private sector collaboration is mutually beneficial, according to CyberScoop, which quotes SentinelLabs senior director Juan Andres Guerrero-Saade as saying, “For private researchers and larger companies in the defense industrial base, the CCC has been a godsend. The center has impressive technical talent in house, setting it apart from other such efforts.

“It’s not a one-sided conversation. It’s not the usual government bullshit of, ‘Give us everything and go away, please.’ That’s why people didn’t want to deal with the government in the past — because you just got bled dry.”

Is It Too Late?

Voice of America (VOA) wrote late last year “concern was rampant that the U.S. has fallen behind China in the development of several key technologies, and that it faces an uncertain future in which other countries could challenge its historic dominance in the development of cutting-edge communications and computing technology.”

VOA went on to report that White House national security adviser Jake Sullivan appeared to agree, quoting him as saying, “We know that nothing is inevitable about maintaining America's core strength and competitive advantage in the world. And we know that it has to be renewed, revitalized, and stewarded, and that is especially true when it comes to U.S. technological leadership.”

The possibility that China, Russia, or some other country could catch or, worse, surpass the U.S. as the world’s leader in developing military technology is indeed real. The quicker a solution comes – be it Congress, the private sector, or more realistically a combination of the two – the better.