Back Channel — An Arms Race That Could Destabilize Geopolitics For Decades, The U.S. Military Is Running Low On Chips, DARPA Kicks Off JUMP 2.0 Consortium, And More 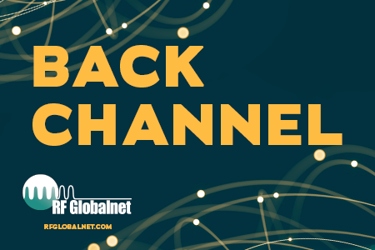 Back Channel presents the most captivating news and innovations in RF and microwaves. This week, AirFuel RF promised free-roaming wireless power over “several feet” in 3D “zones of energy,” Lawrence Livermore National Security announces community gift program recipients, and NASA grant funding is being used to look into pipelines on the moon.

In an editorial for Sowetan, reader Farouk Araie writes, “Major and minor military powers have embarked on a military rearmament program that is truly staggering. It is an arms race that could destabilize the geopolitics of the decades ahead.” Araie suggests, “Drone warfare linked to artificial intelligence is changing the balance of power on land, at sea, and in the air” and cites the war in Ukraine as proof that “the major powers have displayed electronic warfare capabilities of unmanned systems that are capable of disrupting fifth-generation, fighter-plane radars and missiles while jamming communication between bombers, air-borne early warning systems and control aircraft, and sophisticated drones and their data links between satellites and land-based missiles.”

In a related development, Executive Biz is reporting that the U.S. military is getting serious about electronic warfare. “Many of the world’s and the United States’ weapons systems, communications systems, radars, and other military and civilian systems rely on the electromagnetic spectrum to operate, so using EW to detect, disrupt, deceive and deny these systems of access to the EM spectrum can be extremely detrimental,” notes Executive Biz. “Across the Department of Defense, leaders have taken notice of the rise of EW on the battlefield, and they’re pushing EW capabilities to the forefront of their priorities.” They go on to quote Kenneth Bray, associate deputy chief of staff for intelligence, surveillance, and reconnaissance for the U.S. Air Force, as saying Air Force Secretary Frank Kendall wants the Air Force to “be on the offensive. That’s the very first thing he has our staff working on. What are the things we can do to be offensive, to shape the battle the way we want it, instead of being reactive to an enemy that is trying to get inside of our decision cycle?”

The AirFuel Alliance has announced a new global standard for wireless power at range, dubbed AirFuel RF, and members Atmosic and Energous have partnered to launch an evaluation kit for anyone looking to get started with the technology. “Standardization is crucial to worldwide consumer acceptance, interoperability of devices and chargers, and infrastructure development, by creating a network effect for the adoption of technology and sharing a proven framework for others to follow,” said Sanjay Gupta, Ph.D., president and chair of the AirFuel Alliance. “We will offer an AirFuel Certified Engineer program for RF in the spring as well as other educational opportunities and resources. Accelerating demand in the market requires standardization, and AirFuel is thrilled to lead the way.”

Alan Patterson of the EE Times reports the U.S. Military's chip supply is dangerously low. Patterson further notes, “If a war involving Taiwan were to break out in the next decade, the DoD’s ability to respond effectively would be challenged by the Russia-Ukraine War, competition from commercial chip buyers, and an over-reliance on Asian semiconductor suppliers.” According to Mike Burns, an electronics engineer who has founded chip companies like iDeal Semiconductor and Agere Systems, the issue is how fast U.S.-based Intel can catch up with Taiwan Semiconductor Manufacturing Co. (TSMC), which makes Altera and Xilinx field programmable gate arrays (FPGAs) and other chips that the DoD uses in weapons systems like the F-35 fighter jet, missiles, and command-and-control gear. “Maybe that’s a three-year effort,” he told EE Times. “I’m just saying that it’s many years.”

DARPA, along with the Semiconductor Research Corporation (SRC) and industry and academic stakeholders, is kicking off the Joint University Microelectronics Program 2.0 (JUMP 2.0). The SRC-led effort expands on the original JUMP collaboration aimed at accelerating U.S. advances in information and communications technologies. “JUMP 2.0 builds on a 25-year history of partnership between DARPA, SRC, and industry investing in university research focused on disruptive microelectronics,” said Dev Palmer, deputy director of the Microsystems Technology Office (MTO) and the agency’s lead for JUMP 2.0. “This public-private collaboration enables DARPA to incorporate diverse perspectives to drive research thrusts and leap-ahead advances that help keep the U.S. at the forefront of microelectronics.”

Imagine a future in space where pellet-beam propulsion systems speed up travel to other worlds, pipelines on the Moon transport oxygen between settlements, and Martian bricks grow on their own before being assembled into homes. Researchers will delve into these ideas and more using NASA grant funding. The NASA Innovative Advanced Concepts (NIAC) program fosters innovation by funding early-stage studies to evaluate technologies that could support future missions. “NASA dares to make the impossible possible. That’s only achievable because of the innovators, thinkers, and doers who are helping us imagine and prepare for the future of space exploration,” said NASA Administrator Bill Nelson. “The NIAC program helps give these forward-thinking scientists and engineers the tools and support they need to spur technology that will enable future NASA missions.”