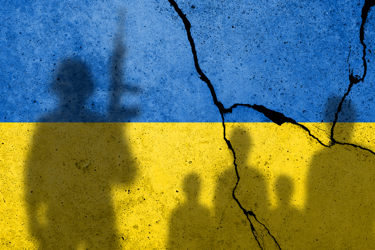 The Russian war on Ukraine has revealed much about multidomain warfare, particularly the proliferation of electronic attacks and countermeasures. And while certainly neither side has tapped — and hopefully won’t — its most destructive electronic warfare resources, both have employed jamming. Uplink and downlink jamming as well as spoofing are techniques intended to disrupt satellite communication and are seeing their fair share of action in the Russia-Ukraine war.

Leading up to and at the start of the invasion, Russian military “spy hackers”, known as the GRU, reportedly brought down satellite broadband services and may have even hacked Ukrainian military, energy, and civilian computer networks. Also early in the conflict, Russian forces began using unsecured radio networks for official communications. And while it was a puzzling choice, it gave Ukrainian ham radio users and open source groups the chance to intercept communications, then use the gain as a way to mock Russian forces, even telling them to “go home” because “it’s better to be a deserter than fertilizer,” according to The Insider.

What’s illuminating about these electronic attacks are what they can show us about the broader issues of stymied government innovation, the hazards of relying on a susceptible Global Positioning System (GPS), and the potential for catastrophically damaging space-based attacks. Let’s explore some ways in which the Russian war on Ukraine has exposed these vulnerabilities.

In early March, Space X reportedly shipped thousands of Starlink satellite kits to Ukraine to get communication services back up and running. Shortly after, Space X CEO Elon Musk claimed via a March 25 tweet that Starlink effectively “resisted all jacking & jamming attempts” with no more than a software upgrade. No further explanation or update has been given since, but that simple claim has apparently left some mouths agape, particularly within U.S. defense circles.

Dave Tremper, director of electronic warfare for the Pentagon’s acquisition office, was quoted by Breaking Defense as calling the achievement “eye watering” and remarking how the Pentagon must similarly be able to react dynamically at the onset of a threat.

The reaction to Space X’s apparent success over Russian meddling is just one example of how government has been eager to tap into the innovation born out of industry and academia. The topic has been broached everywhere, and with seemingly more seriousness, from niche media reports like that of Breaking Defense to conference talks, such as one given by the Defense Innovation Unit’s Christian Whitchurch at March’s SPIE Defense + Commercial Sensing conference.

Consider the five-year-old Defense Innovation Unit. The role of DIU is to foster collaboration among government, industry, and academia to more efficiently and quickly drive innovation to ensure American competitiveness. DIU focuses on six sectors where it has determined the private sector leads in innovation, including cyber and space, and seeks to speed up the prototype contract award process. The interest in increased public-private partnerships has sustained for some time, but the reality of a war perpetuated by one the U.S.’s most capable adversaries has heightened that desire.

2. GPS Is Vulnerable — And We Need Back Up

Jamming has become ubiquitous on both sides of the war, and what’s clear is that in any given moment one side could have the upper hand. Save for the reported software solution purported by Musk and niche UAV/UAS solutions that are resistant to jamming and spoofing efforts, the long-term salve could be more of a paradigm shift.

In a recent Space News op-ed, Dana A. Goward, president of the Resilient Navigation & Timing Foundation, outlined the repercussions of relying solely on GPS as method for position, navigation, and timing (PNT). Goward claims that GPS is too susceptible to electronic attacks and, if significantly impacted, could have widespread impact. GPS-dependent operations include rideshare businesses, commercial fleets, air and land transportation, and even law enforcement agencies, to name a few. The United States employs 32 GPS satellites (remember, Russia has its own system) and state-run Russian media was quick to tout the country’s ability to obliterate all 32 of them.

Given his inclination to stump for an alternative PNT solution based on his position, Goward’s recommendations should be weighed appropriately. But considering the not-so-veiled threat by Russian media and Russia’s general inclination to push the limits of what’s considered acceptable, even ethical, and Goward’s alarm-raising has validity. Could sole reliance on GPS be problematic?

Others think so, too. Though not expressly stated regarding wartime operations, the same sentiment is mirrored by the Open PNT Industry Alliance (OPIA). OPIA advocates for diverse and alternative PNT services that complement GPS. On May 2, OPIA penned a letter of support for the recently approved U.S. Appropriations Acts for 2022, specifically lauding the $15 million set aside for pursuing alternative PNT. However, the OPIA also asked for an amendment that would remove a requirement that the technology be land-based only, allowing for diversity of options.

3. Russia Could Take War Into Space, But Will It?

Russian forces have continued to besiege Ukrainian satellite communications by electronic means, having specifically targeted Navstar GPS systems with jamming efforts, according to the U.S. Space Force. Used by the United States and other countries throughout the world, Navstar uses two dozen satellites to provide a GPS location to within a few feet. Although a report by SpaceNews indicates that Russia has not yet tried to physically interfere with active satellites — known as kinetic physical counterspace weaponry — Space Force is says it’s a real possibility.

On Nov. 15, 2021, Russia successfully knocked out one of its own retired satellites using a kinetic, direct-ascent anti-satellite (ASAT) weapon. Unlike jamming and spoofing, which are reversible, ASAT weapons launched either from the ground or from orbit yield total destruction. Debris from such offenses in LEO (Low Earth Orbit) could also harm crew working at the International Space Station. The most recent threat assessment from the Center for Strategic and International Studies (CSIS) affirms Russia’s counterspace capabilities, adding that the move is likely Russia’s attempt to reaffirm its place as a “major space power” despite having launched fewer space objects in recent years.  Posturing or not, the move demonstrated Russia’s willingness to push ethical boundaries in pursuit of perceived dominance.

For more insight into jamming as it plays out in the Russia-Ukraine war and to learn more about other world powers’ capabilities and pursuits, I suggest checking out the CSIS’s Space Threat Assessment 2022.